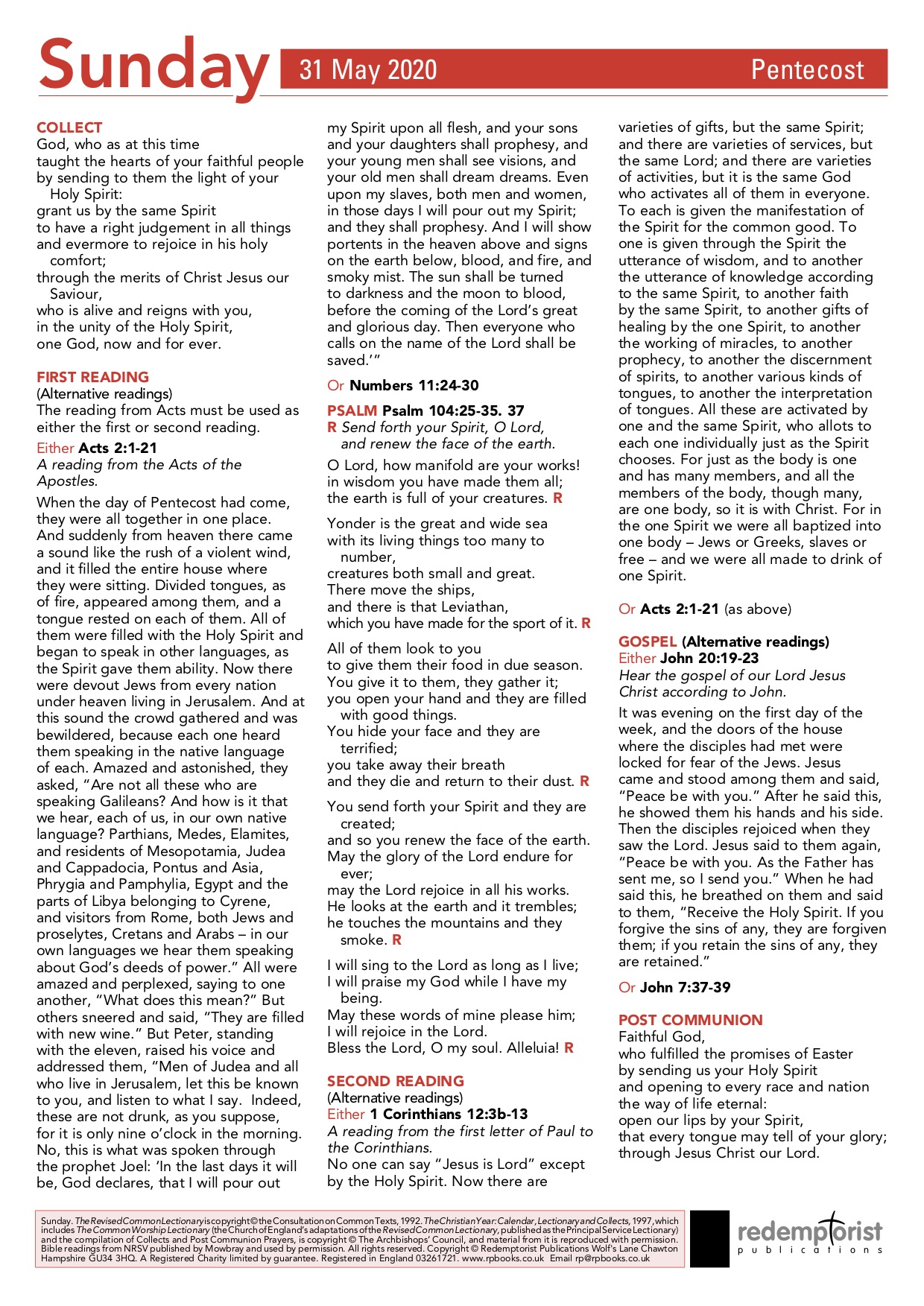 The Ascension. Jesus went up into heaven. There's a story of the first astronaut, that good Communist Yuri Gagarin. It's said that when he first went into orbit he radioed that he could prove there was no God because he had gone up into heaven and it wasn't there. Naive of course but it illustrates the problem that we may have about the Ascension.  We talk about Jesus going UP into heaven, as opposed to down or sideways. Of course it's the only language we can use to describe the events that day but it's only picture language. For we aren't talking about Jesus going up in the physical sense. We are thinking about Him leaving this earth in a physical sense. He died and rose again, but when His earthly ministry was over He left this earth without dying a second time. As for the up bit, we think of 'up' in terms of being spiritual, rather mysterious, full of light rather than being in the sinister darkness down, below ground. So it's not a case of heaven being 'up there' as Gagarin implied in his naivety. Jesus returned to His Father unconquered by death. All religions have thought of heaven being up rather than down, with gods on mountain tops or something similar; we use this imagery in Christanity as well.

Luke had to describe the events of that momentous day using the language and ideas available to him. To have described them in any other way would have belittled the significance of the event. But whatever form it took, it must have confused the disciples even more than they were already, if that were possible. I can imagine them in a kind of spiritual turmoil for at least the previous few months. There was the sense of impending tragedy as they began the long journey south to Jerusalem from Caesarea Philippi, Jesus brooding about His inevitable excruciating death and the fact that He could escape it whenever He liked. There was the Last Supper, with tensions almost reaching breaking point, followed by the betrayal and the crucifixion – their hopes dashed and then raised again by the Resurrection. Then those 40 days after the Resurrection that we know so little about. They wouldn't have been human if they had not been bewildered by everything that was going on – and let's face it,  they were very very human.

But overshadowing everything was the question of whether Jesus was in fact the Messiah that the Jews had dreamed of for so many generations, the great king who would conquer Israel's enemies and restore her greatness. It had sustained them as they languished in exile beside the waters of Babylon. It had sustained them when they suffered unspeakably for their faith at the hends of the Greeks 200 years before Christ came. It was keeping them going as they endured the preening army of occupation that Rome had brought when it conquered the country, made worse by its feeble and hated governor Pontius Pilate with all his loathing and contempt for them. False Messiahs had come and gone but Jesus had spoken of His Kingdom and He had acted in a messianic way. The disciples were full of this but they did not understand the idea of a spiritual kingdom and a spiritual Messiah. So at the Mount of Ascension they were totally confused. 'Are you at this time going to restore the Kingdom to Israel?' they asked. Jesus must have wanted to tear His hair out at that point. Even in these final moments of His ministry it was clear that they simply hadn't a clue. You can't help being sympathetic with Him – but also with them as well.

But Jesus did not call them to understand but to serve, to continue the work that He had begun. 'You will be my witnesses, both in Jerusalem and in all Judaea and in Samaria and to the furthest parts of the world' He commanded them. Interesting that His vision was that of a worldwide faith at a time when religions were almost entirely national, confined to individual countries. Perhaps He said this, perhaps the words were put into His mouth by Luke after Christianity had begun to spread throughout Gentile territory. Or perhaps Jesus was being prophetic. Either way I don't think it matters. What matters is that Jesus told His disciples to go out and spread the good news about His Kingdom and to put into practice the implications of His teaching, the nature of His Kingdom.

And this has been the Church's task ever since, that we should witness to Christ.. The Christians often did this the hard way. I don't want to bore you but the Greek word for witness is Marturum, from which we get the word martyr. All down the ages people have witnessed to their faith by being willing to suffer and die for it. Over 50 years ago as a student training for the priesthood I spent two years trying to work out why the first Christians suffered so much. I never got the resulting degree and it was very disturbing at the time, disturbing ever since. One of the things that I discovered was that far from weakening the Church, martyrdom made it stronger – as the contemporary Christian historian Tertullian put it, 'The blood of the martyrs is the seed of the Church'. The Church has survived and indeed grown because of the faithful witness of its members – history proves that.

But what do we mean by witnessing? Any fool can believe in some sort of god if he puts his mind to it. It is far more rational, far more logical to believe in God than not to do so – in spite of what the atheists will tell you. But Christianity is not just about believing, it's about putting those beliefs into practice. This lies at the very heart of Christianity, as Christ gave His followers two commands – love God and love your fellow men. The two are inextricably linked. Christianity is a way of life based on faith;  it's not about faith alone. People may think that all there is to being a Christian is coming to church, believing vaguely in God, being nice to people and enduring boring sermons. But God has given us this dual commandment, and the implication is that it's the basis for a different way of life, of looking at life, that we show our love for God in our love for other people. At the same time we focus our lives primarily on the spiritual rather than the material. So it's a radically different way of looking at the world and of living in it. We get so worried about the idea of witnessing, that it's about talking and testifying to what we believe. Now quite apart from the fact that we simply don't do that sort of thing in these genteel parts, it's completely wrong. We witness unconsciously by living the kind of lives that Christ would have us live, by showing in our lives that Christianity WORKS, that it is an alternative to the selfishness and materialism that we find around us. As the final prayer in the Eucharist puts it, 'Send us out in the power of your Spirit, to live and work to your praise and glory'. That is how we are Christ's witnesses, by being ordinary people living ordinary lives in the power and under the guidance of the Holy Spirit. That was the task that Christ gave to His disciples when he ascended into heaven. 2000 years later it is given to us in this Benefice as it has been and always will be to all Christ's followers – at all times and in all  places.

all Christ's followers: at all times and in all places. 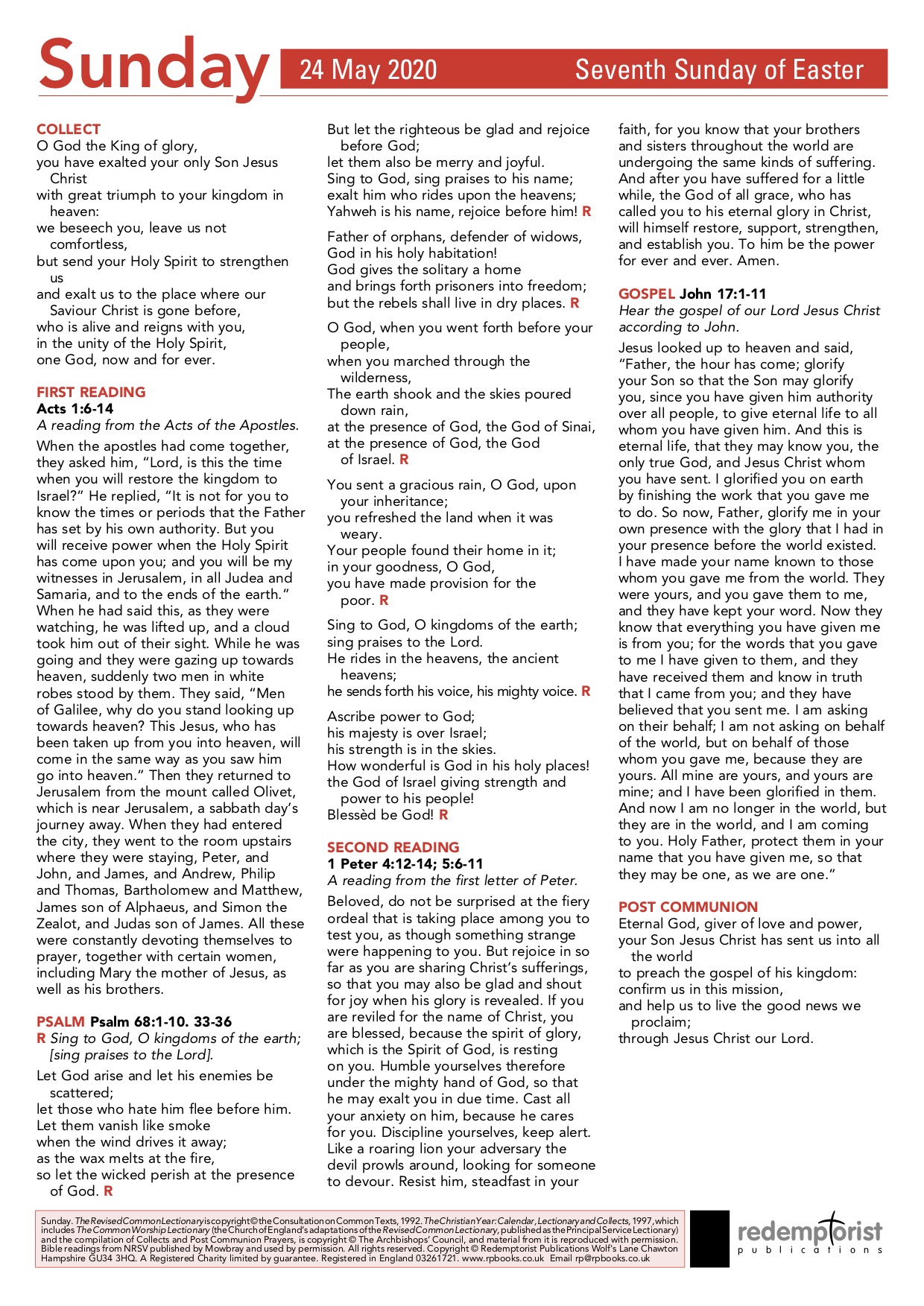 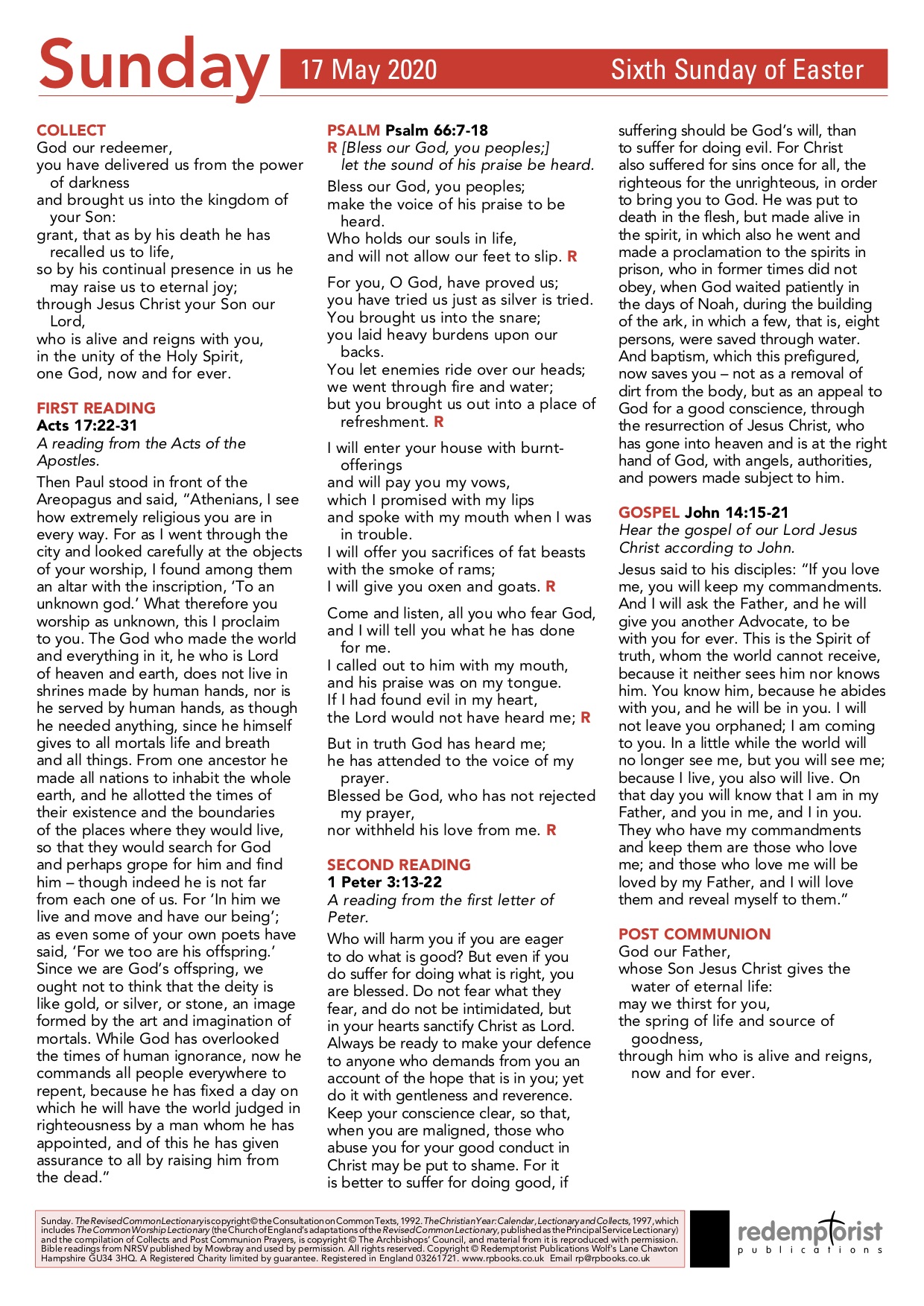