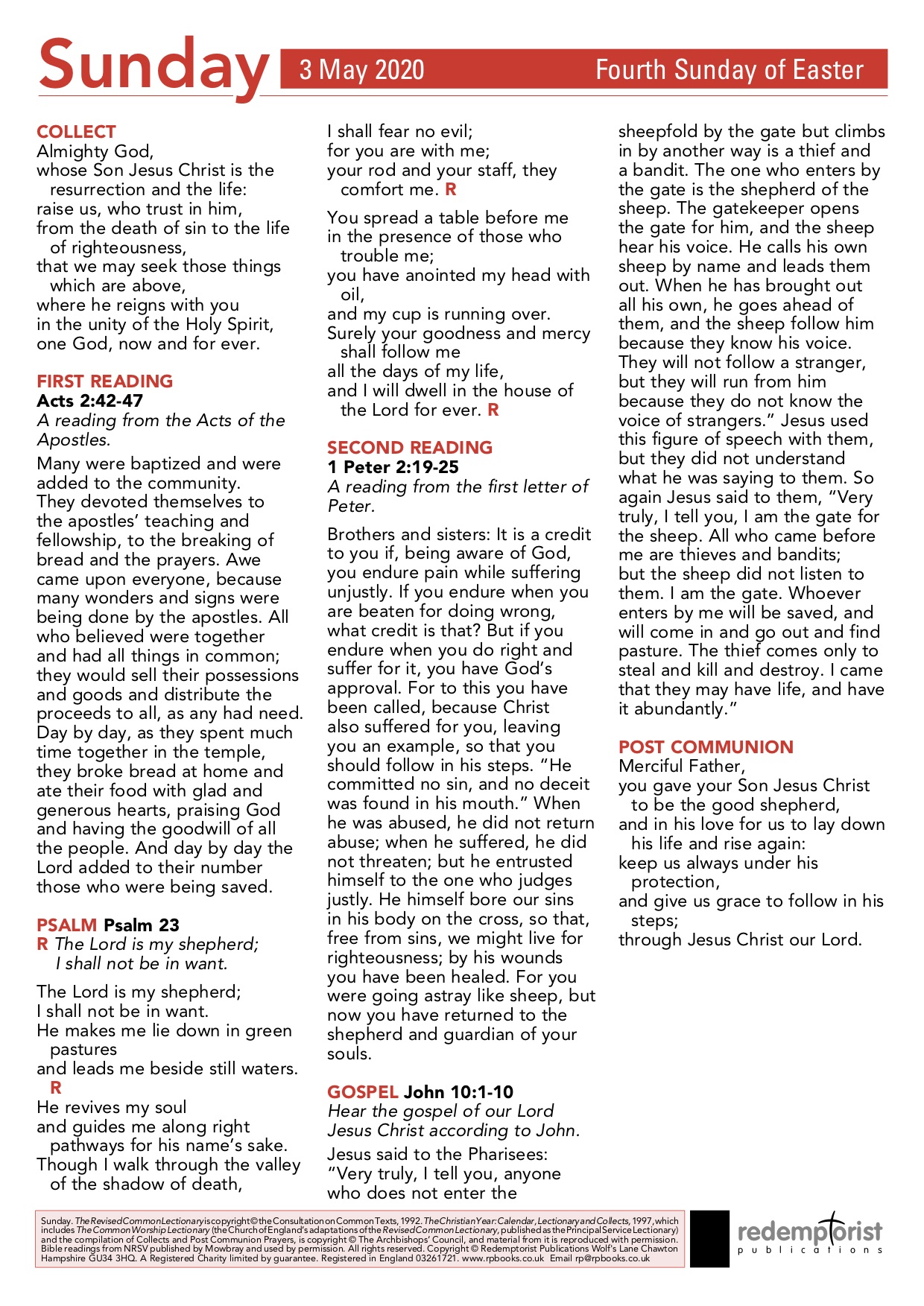 M Hooper
Evening Prayer You may wish to light a candle and have some reflective music playing in the background. The eternal God is your refuge, and underneath are the everlasting arms. Deuteronomy 33.27 Opening Sentences The Lord almighty grant us a quiet night and a perfect end. Amen. Our help is in the name of the Lord who made heaven and earth. Pause and reflect on the day that is past. Save us, O Lord, while waking, and guard us while sleeping, that awake we may watch with Christ and asleep may rest in peace. Psalm A Psalm will be read here and may end with: Glory to the Father and to the Son and to the Holy Spirit; as it was in the beginning is now and shall be for ever. Amen. Bible Reading You may wish to use one of the following short readings or choose a passage of your own. These may very during live services. Sunday Evening You, O Lord, are in the midst of us, and we are called by your name; leave us not, O Lord our God. Jeremiah 14.9 Monday Evening Thus said the Lord God, the Holy One of Israel: In returning and rest you shall be saved; in quietness and in trust shall be your strength. Isaiah 30.15 Tuesday Evening Jesus said, ‘Come to me, all you that are weary and are carrying heavy burdens, and I will give you rest. Take my yoke upon you, and learn from me; for I am gentle and humble in heart, and you will find rest for your souls. For my yoke is easy, and my burden is light. Matthew 11.28-end Wednesday Evening Humble yourselves under the mighty hand of God, so that he may exalt you in due time. Cast all your anxiety on him, because he cares for you. 1 Peter 5.6,7 Thursday Evening Jesus said, ‘I have said this to you, so that in me you may have peace. In the world you face persecution. But take courage; I have conquered the world!’ John 16.33 Friday Evening God has destined us not for wrath but for obtaining salvation through our Lord Jesus Christ, who died for us, so that whether we are awake or asleep we may live with him. 1 Thessalonians 5.9,10 Saturday Evening Jesus said, ‘I am the light of the world. Whoever follows me will never walk in darkness but will have the light of life.’ John 8.12 Prayers A period of silence may be kept where you are invited to offer the people and situations you are concerned about to God. The following prayers may be used but could vary in live services. Merciful God, we entrust to your unfailing and tender care this night those who are ill or in pain, knowing that whenever danger threatens your everlasting arms are there to hold us safe. Comfort and heal them, and restore them to health and strength; through Jesus Christ our Lord. Amen. Be present, O merciful God, and protect us through the silent hours of this night, so that we who are wearied by the changes and chances of this fleeting world, may rest upon your eternal changelessness; through Jesus Christ our Lord. Amen. Visit this place, O Lord, we pray, and drive far from it the snares of the enemy; may your holy angels dwell with us in peace, and may your blessing be always upon us; through Jesus Christ our Lord. Amen. The Lord’s Prayer Our Father, who art in heaven, hallowed be thy name; thy kingdom come; thy will be done; on earth as it is in heaven. Give us this day our daily bread. And forgive us our trespasses, as we forgive those who trespass against us. And lead us not into temptation; but deliver us from evil. For thine is the kingdom, the power and the glory, for ever and ever. Amen. The Conclusion In peace we will lie down and sleep; for you alone, Lord, make us dwell in safety. The Lord bless us and watch over us; The Lord make his face to shine upon us and be gracious to us; The Lord look kindly upon us and give us peace. Amen. Materials in this booklet are drawn from Common Worship: Services and Prayers for the Church of England, Common Worship: Pastoral Services, and Common Worship: Daily Prayer, all of which are copyright © The Archbishops' Council of the Church of England.
Continue reading
Reflections and Weekly Pew Sheet
639 Hits
Previous Next
4 5 6 7 8 9 10 11 12 13