From the beginning of 2015 See Round will no longer be available in newspaper format. It will only be available on line. To sign up for your digital edition visit www.stalbans.anglican.org/news/seeround . 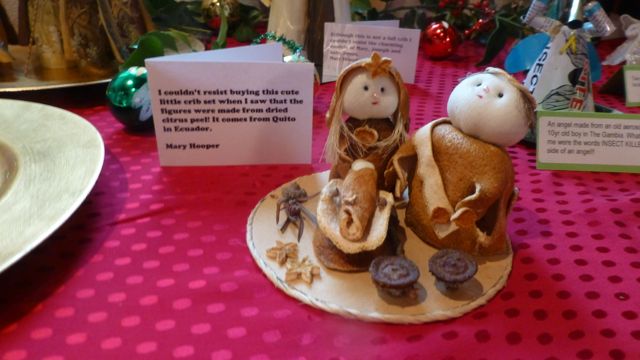 With over 120 cribs on display there was something for eveyone to see. This year our spectacular display had cribs of every type imaginable. There were cribs made of wood, clay, citrus peel, soap stone, beads, knitted ones, ones made of Filmo and wool, there was even an Angel made from a used aerosol can by a little boy in The Gambia.Some came from as far a field as Panama and Burma, in fact there were cribs from Ecuador, Panama, Wales, Spain, Belize, Tanzania, Gambia and Niger. Would you believe one was even purchased from Wilkos!!

A big thank you to the fund raising committee of Barbara Thomas, Jane Veasey, Mary Hooper and Lynda Garner for all their hard work in putting it all together and of course for all the helpers who came along either to make teas and coffees, general act as stewards, to lift in and out the heavy display boards, take money on the door or bake a cake to sell.

A special thank you to everyone who lent their precious cribs for the weekend, without them we would not have a crib festival.

It was pleasing to read comments from our many visitors who took the time to write in our visitors book. It is clear that our visitors really enjoyed the displays.

If you would like to see a sample of the cribs on display then have a look at the photo gallery on this web site. http://www.stippolytschurch.org.uk/gallery/crib-festival-2014

Thanks to the generosity of 'The Friends of St Ippolyts Church' we now have a new oak hymn number board in St Ippolyts Church. The old metal one which was originally made at St Ippolyts Foundry and donated Michael Skeggs has proved to be just too heavy to manipulate and it was felt we should have a lighter board which would be easier to lift up and down. The new board is certainly in keeping with our church and once again thanks to 'The Friends'. 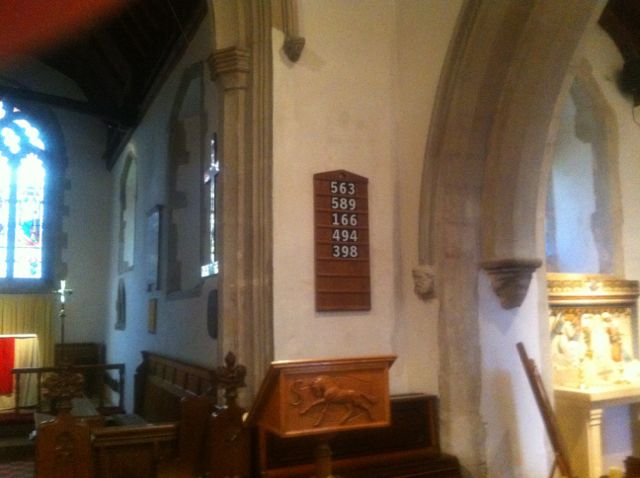 What a manic two hours at the annual Christmas Parish Hall Fair. From the time of opening the doors at 2 p.m. to the finish at around 4.30 p.m. the hall was packed with parishioners buying raffle tickets, playing at the various tombola stalls, guessing how many sweets there were in a jar, trying to put marbles into a upturned flower pot, visiting Father Christmas in his grotto or just having a cup of tea and a delicious piece of cake. The St Ippolyts Church PCC had a tombola stall which was incredibly popular. Well done to Jane and Jennifer Veasey for putting all the prizes together and for Jane, Jenny and Mary for manning the stall. Your junior churchwarden was there trying to sell his Christmas Quiz Sheets. In the end the stall raised well over £160 half of which is for the Parish Hall funds. 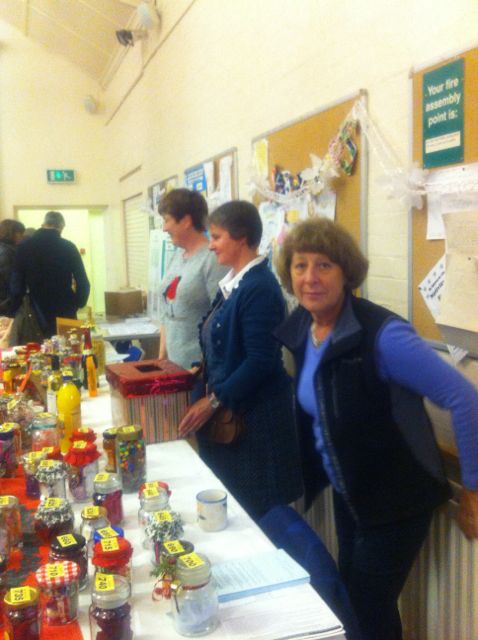 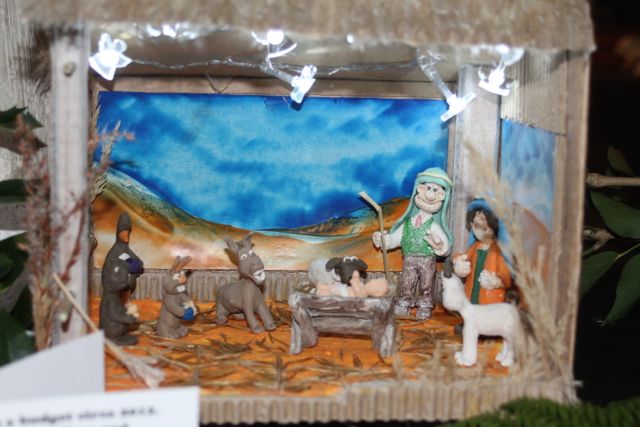 Get into the spirit of Christmas and pay a visit to the St. Ippolyts Church Nativity Crib Festival.

As one or our young contributors says:-

“You should come to the Crib festival at St Ippolyts Church because there are so many different cribs that are put in each year !

There are at least 50 (usually over 100) if not more ,from the tiniest ,to a large church crib.
Some of these cribs have a long history ,and some will be new.
There are cribs that have been bought when people have travelled all over the world ! One crib is even made from orange peel !
You can also enjoy a cup of tea/coffee, cold drink and a cake !!!
I always look forward to this occasion at Christmas, because it is lovely to see every crib there, who entered them, and the history behind each one.
It's the start of the lead up to Christmas for me.
We hope to see you there.
Issie Volske year 7”

You will also be able to have a go at our competition and become a crib owner yourself.

Entry is £2 and children are free.

St Ippolyts Church Sports Quiz Sheets will be on sale, do not miss out on these super time wasters

For more information please contact Barbara 01462 421647This email address is being protected from spambots. You need JavaScript enabled to view it.

This email address is being protected from spambots. You need JavaScript enabled to view it.">
Continue reading
News
1192 Hits 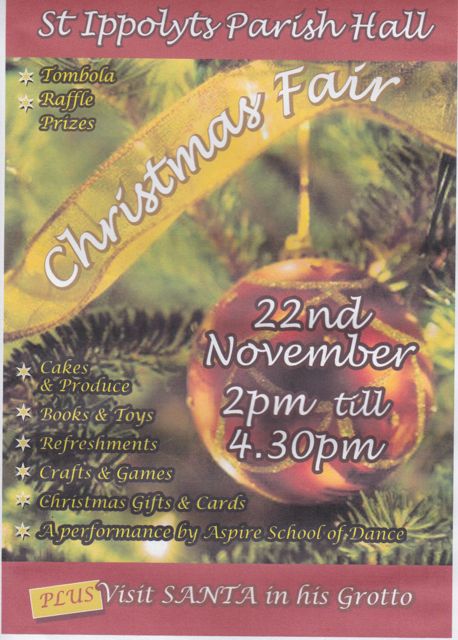 There will be a Christmas Fair on Saturday 22 November from 2pm at St Ippolyts Parish Hall.  There will be lots of stalls, face painting and Father Christmas will be visiting.  Refreshments are available. Dancing display by Aspire School of Dance. Prize Draw at 4.30pm.

Over 110 people attended our annual Quiz in the Parish Hall to raise money for the Church. Fifteen teams battled it out answering a wide variety of questions set by Mary Hooper. In the end infiltrators from Clifton and the surrounding area usurped the home teams to win by 1 point. The quizmaster, Michael Hooper, assured everyone he had not been bribed with offers of free drinks to give the winning team the answers.

A big thank you to everyone who helped and gave prizes for the raffle. Special thanks to the Jane and Jennifer Veasey who, ably assisted by Kath Burt and Jane Guppy, supplied the teams with a sumptuous ploughmans supper and Brian and Hilary Leonard who ran the bar!

Now our annual quiz is over do not forget that the 2014 St Ippolyts Church quiz sheets are on sale for £1 from the village store or Michael Hooper. This years quiz theme is Sport. Buy a quiz sheet and be frustrated trying to unravel the mind of the setter. He certainly has a warped mind! There is a £10 prize for the person who answers the most questions correctly by the end of December.

The Church North porch new permanent disabled access is now in operation although there remains a few finishing touches to complete the work. A big thank yoiu to Roland Bailey who has carried out this new construction as well as installing a new bookcase and notice board at the South entrance.

The disabled access is a welcome addition to the church infrastructure and means that we will not need to lug the heavy ex British Railways ramp from the North porch everytime we have a service or event. 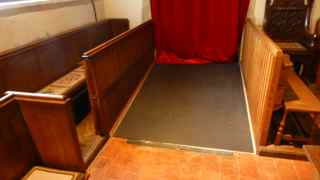 Where have you read PAX?

We all receive PAX each month, but where do you read it? In fact where is the most exotic place that PAX has been read?

Just take a photograph of somebody reading PAX, send it to Michael Hooper at This email address is being protected from spambots. You need JavaScript enabled to view it. and your photograph will be published in our picture gallery on this web site.

I wonder how far afield PAX will travel!!?

Just to start things off our PAX has visited the Old Man of Hoy in the Orkneys, surely a PAX will have travelled further than that!! 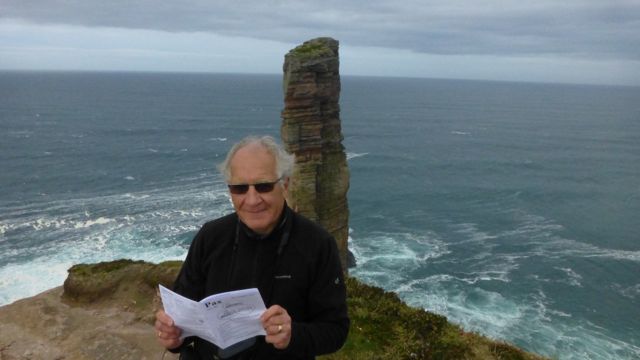 If you saw two people crawling on the ground looking at gravestones through a magnifying glass today you will have seen Andrew Harris and Paula Shipway investigating lichens around and on our Church. This intrepid pair having visited over 40 churches and churchyards in Herfordshire recording the various lichens. You may recall Andrew found a particularly rare lichen at Great Wymondley Church. We eagerly await Andrew's report which we will hopefully receive before the end of the year. Have a look at the photos of them exploring our churchyard on this web sites gallery.

St Ippolyts Church - At the End of the Rainbow

St Ippolyts Church at the end of the rainbow

A big thank you to all the helpers who manned St Ippolyts Church for this annual event. We had a steady stream of cyclists visiting the church throughout the day, all welcomed the refreshments on offer.

A extra special "well done" to Jeremy and Carol who covered 41 miles to visit 30 Churches and raise money for the Beds and Herts Historic Churches Trust.

The Bike 'n Hike is an annual fundraising event organised by Beds and Herts Historic Churches Trust.The aim is to raise money both for the Trust and for the participating churches. Half of every cyclist’s and walker’s sponsor money goes to the Trust and half goes to the church of their choice. Consequently, the more cyclists or walkers who take part, then the greater the direct benefit to that church.

See our gallery for photos

Don't spend the Saturday night of 8th November 2014 at home watching so called celebs trying to dance. Come and have some fun in the St Ipployts Parish Hall where we will be having our annual quiz night to raise money for the Church.

Make up a team or just come along and meet others who will either be scratching their heads or being smug that they know the answers (yes, you know who you are!!). There will be a bar and included in the ticket price of £10 will be an absolutely delicious ploughman's supper.

There will be a prize for the lucky ticket number! One doesn’t even have to answer a question correctly to win this fabulous prize!

This is an absolutely great evening one you just cannot miss.

Look out for the Church 2014 Christmas Quiz Sheets which this year will be sports, sporting terms or sporting venues! You know that there is nothing to watch on the television during the long cold winter nights. Why not cosy up with a hot cuppa of steaming cocoa or something a bit stronger and get those brain cells working. This year's quiz will be just as fiendish as previously and IT IS ONLY £1!! Of course you can donate more if you really enjoy it!!

Quiz Sheets will be on sale from the end of October from the church, the village shop or directly from myself.

All money raised will go to the St Ippolyts Church fabric fund.